Alvaro Morata is starting to show why Diego Simeone wanted him. Morata scored twice to give 10-man Atletico Madrid a 2-0 win at Real Sociedad on Sunday and keep alive its hopes of fighting Barcelona for the Spanish league title. 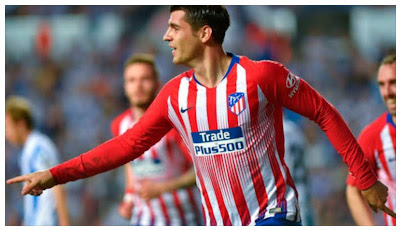 Football news: Atletico’s third league win in a row kept it seven points behind leader Barcelona, which left Real Madrid 12 points adrift in third place after beating its fierce rival 1-0 on Saturday.“We have to win all the points we can and hope they drop some along the way,” said Morata, who headed home in the 30th and 33rd minutes of a first half dominated by the visitors.
Atletico’s chances of catching Barcelona most likely hinge on winning at Camp Nou next month. But first it must focus on a Champions League round-of-16 second leg at Juventus on March 12, when it will protect a 2-0 first-leg win.Morata’s first goal came from a corner taken by Thomas Lemar that Diego Godin knocked on for the on-loan Chelsea striker to nod home.
Ahead of his second, he was fouled outside the penalty box. He then outjumped his marker to head the resulting free kick by Jorge “Koke” Resurreccion into the corner of the net.Atletico had to rely on staunch defending after Koke was sent off in the 62nd following two yellow cards for bad tackles.
“They killed us on two set-pieces and were comfortable the rest of the way,” said Sociedad defender Diego Llorente. “Settling back in defense is one of their specialties.”
Reliant for long stretches of the season on the goals of Antoine Griezmann, Atletico coach Simeone welcomed Morata’s arrival in January as a chance to give his team another scoring option.And after having a pair of would-be goals chalked off by video review in his first matches back in Spain, the former Real Madrid striker has now scored in back-to-back games.
It was Sociedad’s first loss in 11 matches under coach Imanol Alguacil, who took over the Basque Country club in December.The hosts lost striker Willian Jose to injury early in the match.
UNBEATEN VALENCIA
Valencia extended its unbeaten streak to 11 matches in all competitions with a 2-0 home win against Athletic Bilbao.Rodrigo and Kevin Gameiro scored to lift Valencia to seventh, just outside the Europa League spots.Valencia’s last defeat was against Getafe in January. Athletic dropped to 11th after a first loss in four matches.
GETAFE WINS AGAIN
Getafe reclaimed fourth place, the final Champions League spot, after winning 2-1 at Real Betis.Leandro Cabrera opened the scoring and forward Jaime Mata added his 11th league goal of the season before halftime. Betis pulled one back though Joaquin Sanchez.
SINKING CELTA
Forward Sergi Enrich struck with three minutes remaining as Eibar defeated Celta Vigo 1-0.The away loss prompted Celta to fire Portuguese coach Miguel Cardoso and replace him with Fran Escriba, who previously managed Getafe and Villarreal.Celta, which has one win in 11 games, is two points above the relegation zone.Eibar striker Charles missed a penalty early in the second half, while Celta came close when Maxi Gomez hit the crossbar.