Trent Boult gave the impulse expected to New Zealand with a five-wicket pull as the hosts finished an innings and 52-run triumph over Bangladesh on the fourth day of the principal Test in Hamilton on Sunday. 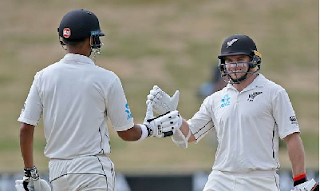 The left-arm seamer got this show on the road the second new ball to swing back, brush Sarkar’s cushion and gun into his off-stump to end the 26-year-old’s 171-ball innings on 149. It was Sarkar’s first Test century.

The achievement viably finished Bangladesh’s opposition, regardless of whether Mahmudullah did his best to secure the tail, and they were inevitably expelled for 429 around 20 minutes after tea.

Mahmudullah made 146 and was gotten on the limit by Boult, who completed with figures of 5-123, preceding Tim Southee had Ebadot Hossain gotten by BJ Watling, who broke Adam Parore’s New Zealand record for Test expulsions by a wicketkeeper.

The guests had been in peril of being rejected inside three days when they were decreased to 126-4 after tea on Saturday before Sarkar joined with Mahmudullah.

The pair figured out how to take the guests through to 174-4 at the end of play and kept on foiling the hosts’ bowlers amid Sunday’s first session with Sarkar going from 39 to his century, carrying it up with a solitary off Southee.

They agreed with their position to 322-4 at lunch and kept on opposing New Zealand after the break, notwithstanding when they took the second new ball.

Boult, in any case, figured out how to expel Sarkar and afterward bowl Liton Das for 1 and Khaled Ahmed for three preceding Southee had Mahmudullah gotten in the profound after tea and after that finished the match when Hossain scratched behind.

The second match of the three-Test arrangement begins in Wellington on Friday.