An  bomb went off at an outside market in the southwestern city of Quetta on Friday, killing somewhere around 16 individuals and injuring a few others, police and clinic authorities said. 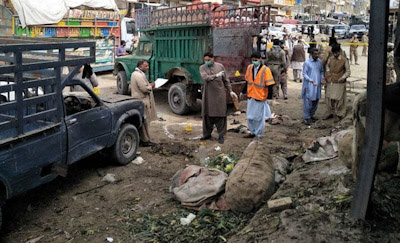 Asian news: The bombarding occurred almost a local location where minority Shia Muslims live, as per senior police boss Abdur Razzaq Cheema. “Crisis has been pronounced at emergency clinics and it appears individuals from the Hazara people group were the objective,” he said. No gathering has promptly asserted obligation regarding the assault however prohibited Sunni fanatic gatherings have guaranteed comparative assaults previously. Sunni fanatics see Shiites as faithless people meriting demise.
Jam Kamal Khan, the central priest of Baluchistan region, denounced the shelling, saying “the adversary of mankind is behind this demonstration of fear-based oppression.” He said he requested experts to give the most ideal treatment to those injured.
Quetta is the capital of Baluchistan, which likewise is the scene of a low-level rebellion by separatists requesting more self-governance and a more prominent offer in the district’s common assets, for example, gas and oil.